10 Turmeric Smoothie Recipes That Will Beat The Heat!
0 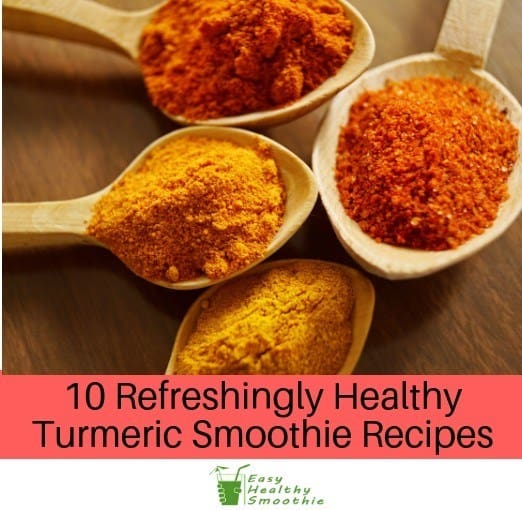 10 Turmeric Smoothie Recipes That Will Beat The Heat!

Adding turmeric to your smoothies can have some big benefits for your health.

This wonder spice has long been a popular staple in Ayurvedic and Chinese medicine due to its healing properties but you may know it as a major ingredient in a lot of curries.

It is a compound called curcumin (which gives it the traditional yellow color that you’ll probably associate with curries) that delivers most of the benefits.

Turmeric is highly anti inflammatory and also has antibiotic qualities. It is linked to improved digestion, detoxing the body, better wound healing, pain relief and lower cholesterol levels, to name but a few of the benefits.

It can also improve immunity, help to manage skin conditions such as psoriasis and may even protect against Alzheimer’s Disease and some cancers.

And that’s not all … it’s also weight loss friendly too! By now, you’re probably really excited about how you can get more turmeric into your life, especially through smoothies.

Read on for some ideas for turmeric smoothies and more information on some of the health benefits of turmeric.

Related:  Check out our Kiwi smoothie recipes....10 of the best! 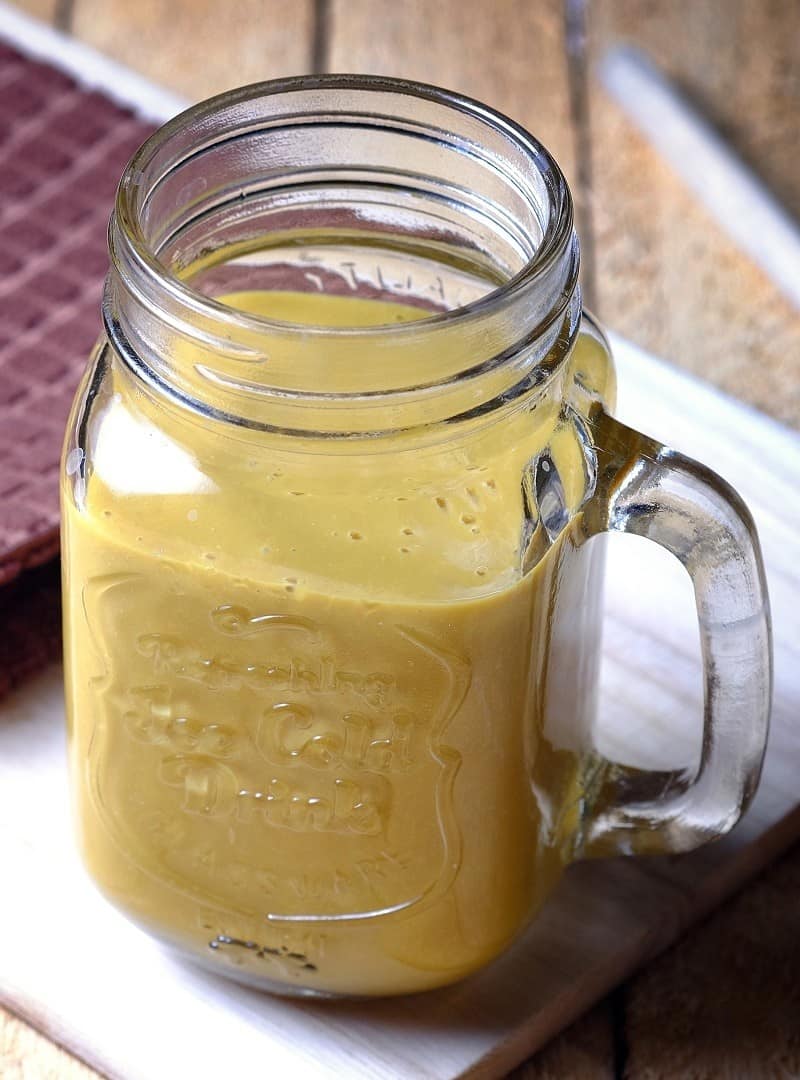 This is a great choice for a breakfast smoothie as it’s packed with fiber and protein.

It’s also got strong anti inflammatory benefits thanks to the spices. With banana, honey and vanilla extract, it’s got a naturally sweet taste that will appeal to both kids and adults and with almond milk and banana, it’s also super creamy too.

Honey and vanilla really offset the spiciness of the turmeric, cinnamon and ginger. 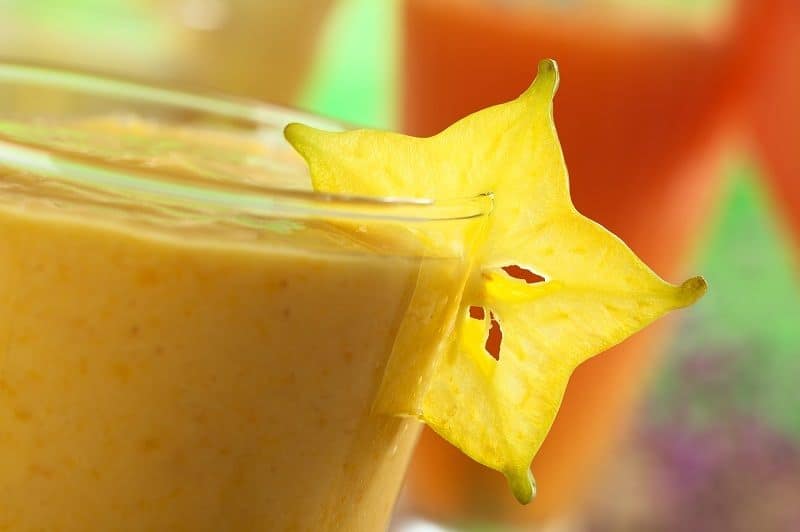 It uses black pepper and coconut oil to help your body to absorb turmeric more effectively so you can make the most of the anti inflammatory benefits.

Technically it’s a green smoothie but it tastes refreshing and has a tropical vibe thanks to the pineapple.

It’s also a fairly low calorie smoothie and contains a decent amount of fiber and protein to keep you feeling full. 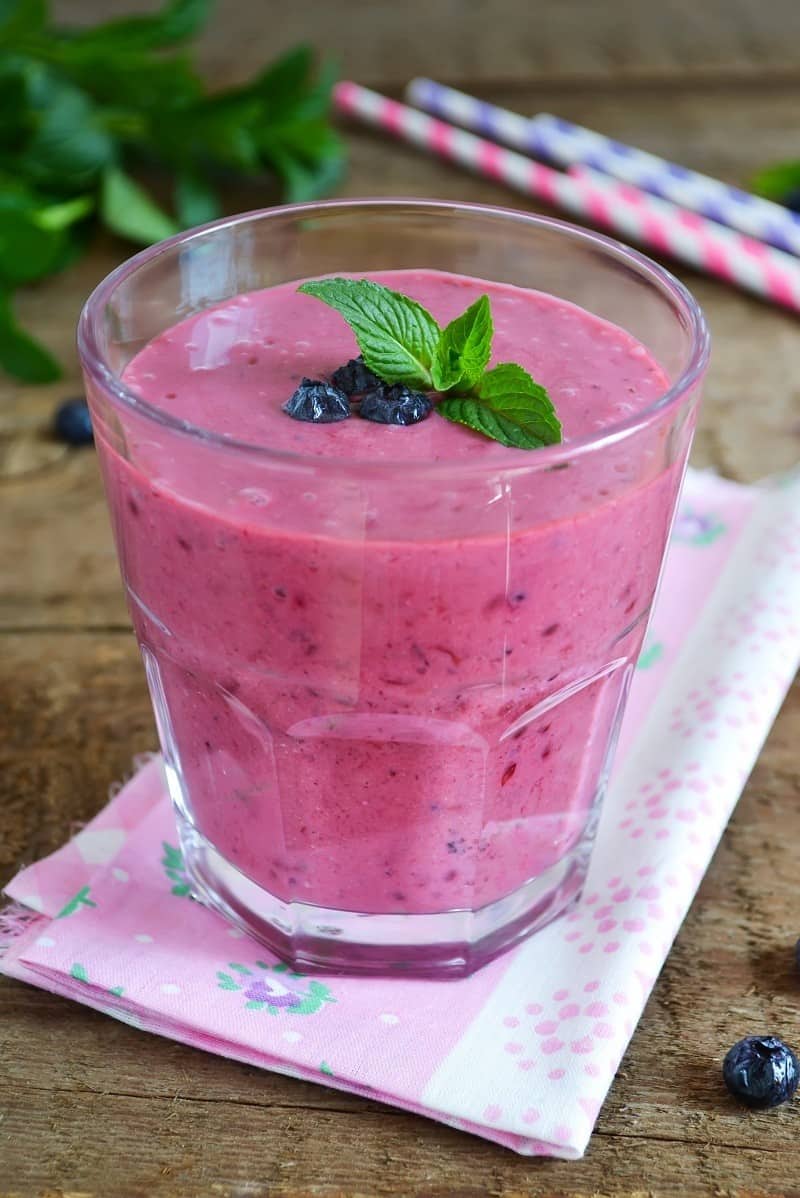 If you’re looking for a simple but super healthy smoothie that can help with inflammation, this is a great option. With blueberry and turmeric, this smoothie is a delicious combination of sweet and slightly tart.

Blueberries provide plenty of antioxidants and are highly anti inflammatory. If you can use wild blueberries, this will maximize the antioxidant and anti inflammatory effects. There is also green tea in this smoothie. It’s also a filling smoothie thanks to the cashews, which provide healthy fats and protein. 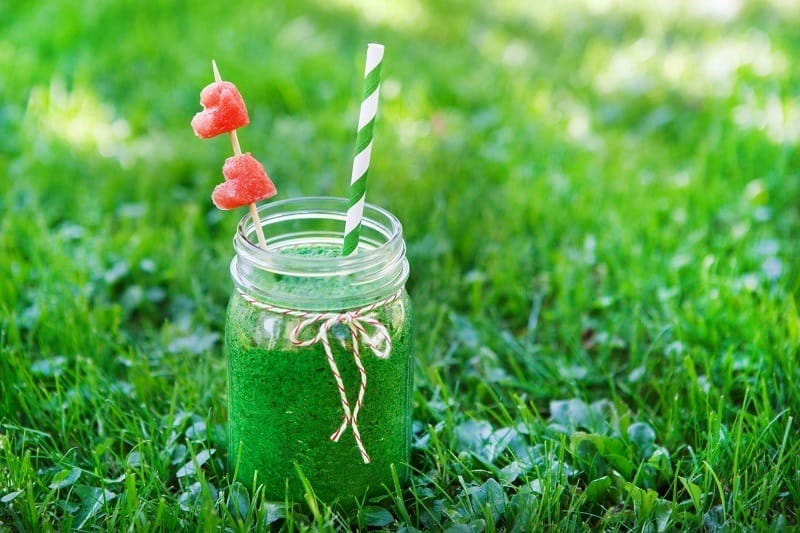 This smoothie is great for detoxification, as well as being highly anti inflammatory. Kale ticks both of these boxes and provides a lot of nutrients too.

Pineapple and mango are a perfect complement to offset the taste of the kale and also provide fiber, vitamins A and C and anti inflammatory bromelain.

Lemon and ginger are also detoxing and ginger increases the anti inflammatory benefits of this smoothie too.

Black pepper helps to increase absorption of turmeric. There are even healthy fats from the coconut milk, which also help with absorption. 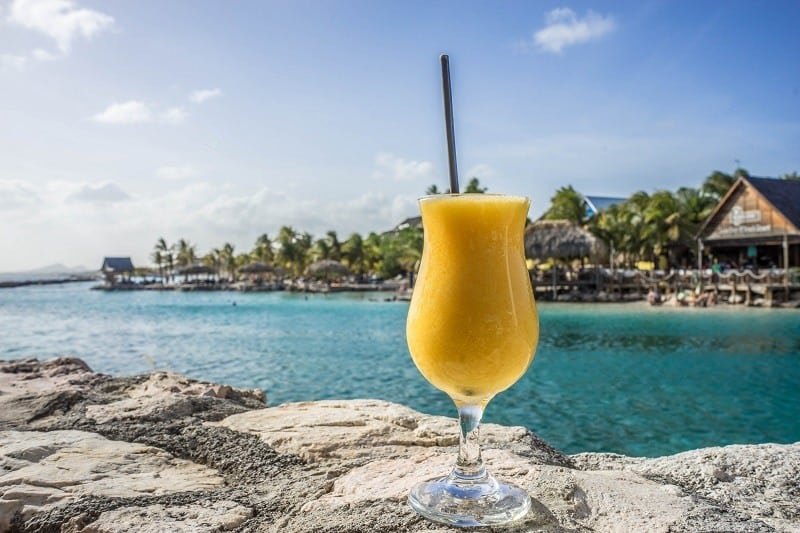 Ginger, banana and pineapple make for a smoothie that has powerful anti inflammatory benefits and it’s also pretty low in calories.

It is naturally sweet, with a slightly tart edge and there’s also a kick from the ginger. It’s a vibrant orange color that is sure to brighten your mood. For those of you on a gluten free or vegan diet, it’s suitable for both. 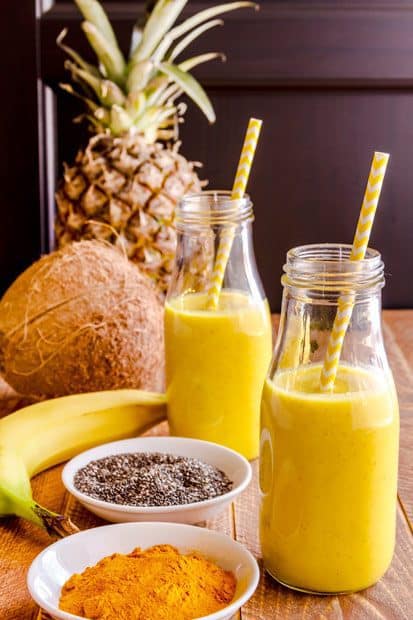 This smoothie is delicious and refreshing. The acidity of the pineapple dials down the spicy flavor of the turmeric and adding in cucumber and gingers makes for an even fresher taste.

And if you use coconut milk, you can even replicate the taste of a pina colada! There’s plenty of vitamin C in this smoothie. 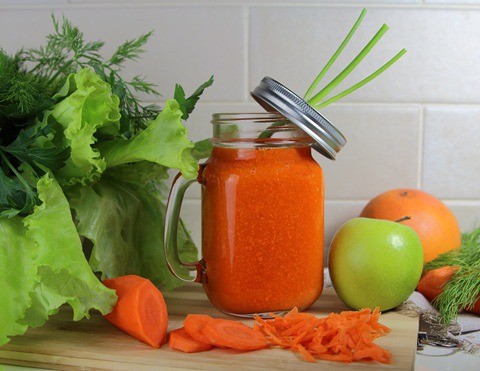 Carrot, apple and turmeric are a dream combination in this smoothie. They also make it highly nutritious too and add some strong anti inflammatory benefits (along with the compounds in ginger and the bromelain in pineapple).

Carrots contain beta carotene, a powerful antioxidant. As well as being anti inflammatory, this smoothie is also good for your skin, immunity and mood.

The only downside is that it’s not got a lot of protein so it won’t keep you full as a breakfast smoothie. It’s great as a healthy snack smoothie though. 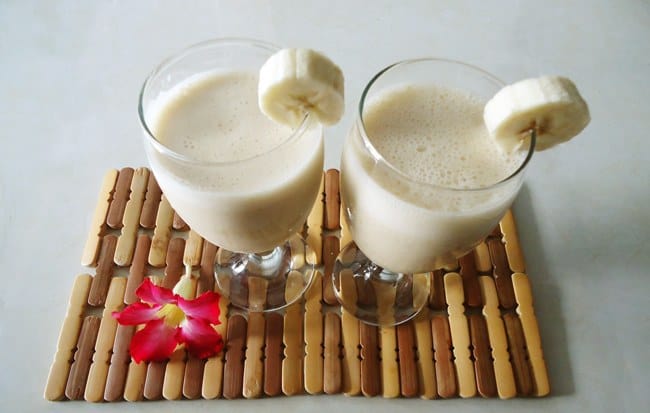 There are lots of healthy fats in this smoothie from the avocado and seeds, which also offer anti inflammatory benefits. It’s also got plenty of protein, which makes it a great choice as a filling breakfast smoothie. 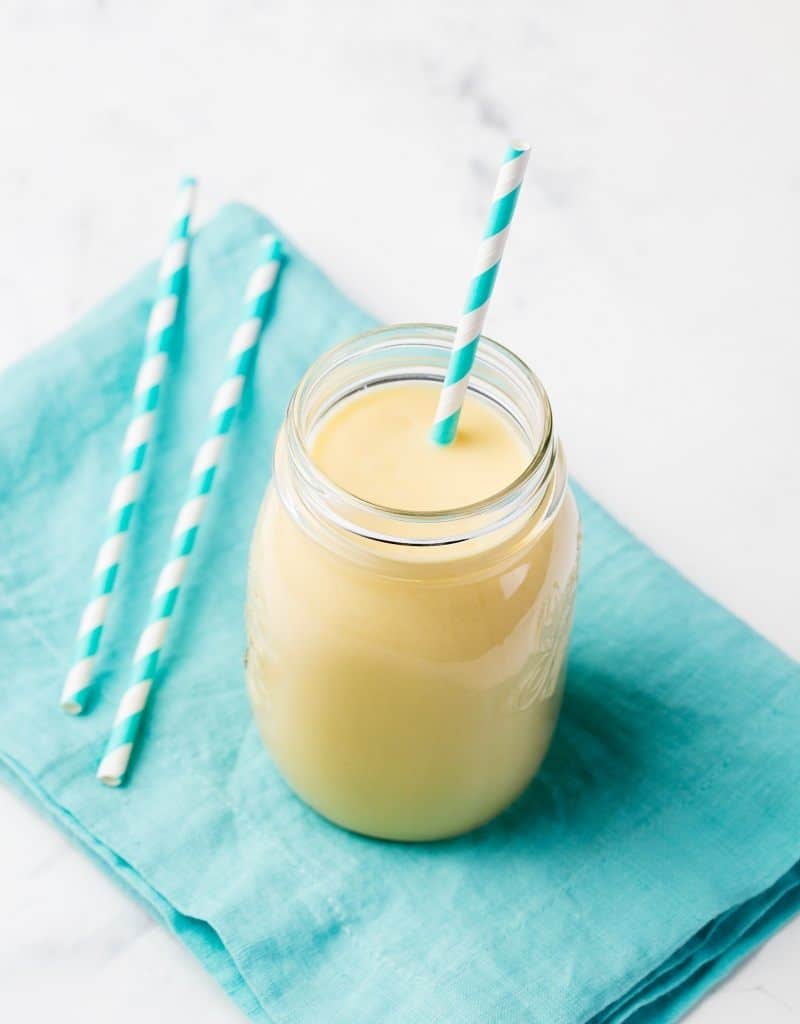 With turmeric and cinnamon, this smoothie has a great taste along with its anti inflammatory qualities. Throw in some vanilla, dates and almond milk and it’s a deliciously sweet and creamy smoothie, with a hint of spice. 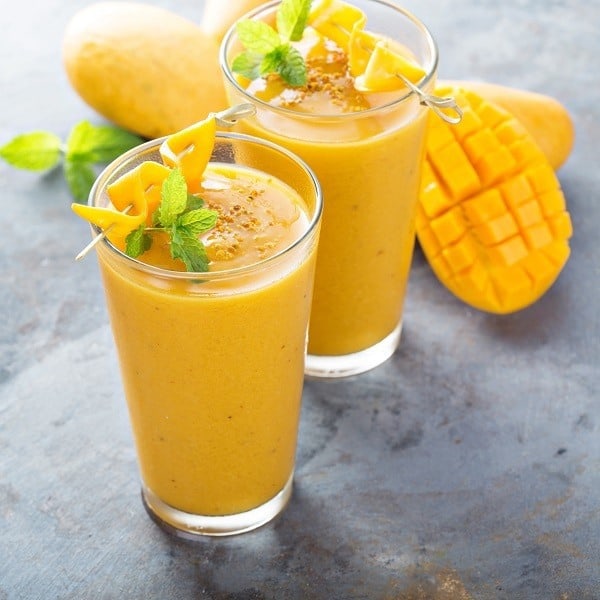 This smoothie is packed with nutrients and it’s also incredibly delicious. It’s a great choice as a breakfast smoothie as it’s super simple to make and will keep you feeling full all morning.

Oats and Greek yogurt help with this. With turmeric, mango and ginger, it’s also full of anti inflammatory ingredients.

Mango also provides vitamins A and C. Using frozen fruit creates a creamy and ice cream style texture, which will go down a treat with kids (and plenty of adults too, probably!).

Turmeric is a spice so you can expect it to give a bit of a kick to your smoothies - although not as much as a lot of other spices.

Taste wise, it is fairly mild and adds a warming and pepper-like vibe. This means that it won’t be a dominant force in your smoothies and you’ll get the health benefits without it affecting the overall taste too much.

Is turmeric a blood thinner?

Turmeric is thought to be a natural blood thinner that can help to prevent blood clots, although its effectiveness for this hasn’t been widely tested in comparison to prescription blood thinners.

Some studies have suggested that curcumin could affect platelets so that blood clots are less likely.

Is turmeric good for the liver?

The curcumin in turmeric is thought to fight back against oxidative stress, which can be a factor in liver problems. Oxidative stress occurs when there are more free radicals than the body can easily eliminate.

Studies have indicated that curcumin can reduce oxidative stress and metabolic markers of liver disease. It may even be able to protect against cirrhosis of the liver.

Is turmeric good for skin?

The antioxidants in turmeric can be great for glowing skin, as can the anti inflammatory benefits.

This is one of the reasons why turmeric is often used topically in homemade face masks but you can also get a lot of the benefits by consuming it orally.

It can also help to keep the symptoms of psoriasis under control. The antioxidant qualities can also potentially be anti aging.

Is turmeric good for acid reflux?

Turmeric has traditionally been used to treat stomach and digestive problems but there isn’t a lot of scientific research as to whether it can improve symptoms of acid reflux.

There is anecdotal evidence that it may work to relieve heartburn. Some studies have linked acid reflux to inflammation and oxidative stress, and as turmeric is anti inflammatory, this may be why it can improve acid reflux for some people.

Is turmeric good for gout?

Turmeric has been put forward as an anti gout remedy in recent years. One study suggested that curcumin may improve gout symptoms by inhibiting xanthine oxidase, which is involved in production of uric acid.

Like a lot of spices, turmeric has an alkalizing effect on the body.

The vivid yellow color of turmeric may make you wonder whether it will stain your teeth. Turmeric has actually been linked to whiter teeth, although the evidence is anecdotal. Turmeric may also have other benefits for dental health, including protecting against gum disease and reducing dental/tooth pain.

Does turmeric cause gas?

Turmeric is often used as a natural remedy for digestive problems, including bloating and stomach pain.

Taking high strength turmeric supplements can sometimes cause gas and other gastrointestinal problems but most people won’t experience gas by adding turmeric to your smoothies.

Turmeric is a great way to make your smoothies more anti inflammatory. If you’re looking for ways to reduce inflammation through your diet, adding turmeric to your smoothies on a regular basis is an easy way to get the benefits.

As always, please feel free to share this piece with your friends and family so they can learn more about the benefits of turmeric and how to use it in your smoothies.